Health care stocks skyrocketed after Tuesday’s election results indicated Republicans likely will maintain control of the Senate, all but assuring continued gridlock in both chambers of Congress.

A Republican Senate means “the public option and direct government negotiation on drug prices are dead for at least the next two years,” Spencer Perlman, an analyst at Veda Partners, wrote to investors Wednesday. 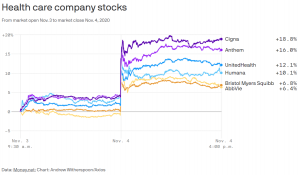 The Supreme Court is about to hear a case that could invalidate the Affordable Care Act. If the conservative majority strikes down the entire law, the industry would face considerable upheaval after spending the past decade incorporating the law into their businesses.