Almost all of the major health insurance companies are spending more on medical care this year than they have in the past.

Rising prices and more services for sicker patients are among the many reasons why this is happening. That uptick in spending has freaked out Wall Street, even though insurers are still quite profitable.

Almost all of the eight major publicly traded insurers have shown their medical loss ratio — the percentage of premium revenues they’re spending on medical claims — is rising this year.

Medical loss ratios are often higher for health plans that cover more older adults, the disabled and the poor because those groups typically need more care or are in the hospital more frequently.

But costs have been climbing in some commercial markets, too.

Health insurance companies closely track their medical loss ratios and aim to hit those targets most often by charging higher premiums, denying care, forcing people to use lower-priced providers or declining to cover people they deem to be too expensive. 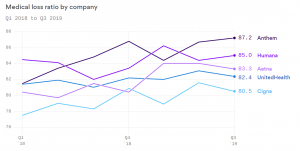