Healthcare expenses forced 8 million Americans into poverty in 2018, according to the Census Bureau, an improvement from the past several years, when an annual average of 11 million people fell into poverty because of medical costs!

People who don’t have insurance are the most likely to fall into poverty, due to the high prices of drugs and procedures. But even working Americans who have insurance coverage are facing bleaker financial futures because employers have shifted more health care costs onto their shoulders. 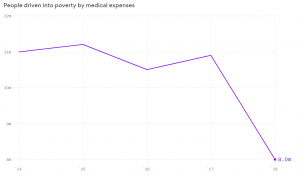