A fundamental change in the architecture of Medicare is rapidly happening into something different to what people think the Medicare program is.

Medicare Advantage (MA) continued to grow during the pandemic, and most Medicare enrollees will be in private plans in a couple of years despite MA’s deep-rooted problems.

Spending on MA is rising precipitously (2021 to 2022 by over 8%) due to several policies, but the most notable is “risk adjustment.”

The Congressional Budget Office predicts MA enrollment will surpass 37 million in 2026, which would equal half of all Medicare enrollees. More individuals are picking MA plans when they turn 65, and more employers are shifting their retirees to MA plans (sometimes unknown to the retirees!)

MA is consuming more membership and more of the Medicare trust fund, but many enrollees are not sticking with their plans until the end. MA enrollees who are in their last year of life ditch their plans for traditional Medicare “at more than twice the rate of all other MA beneficiaries”; those people get sicker, they need more care, and their plans’ networks limit access to the doctors, hospitals, nursing homes and hospice care they want. 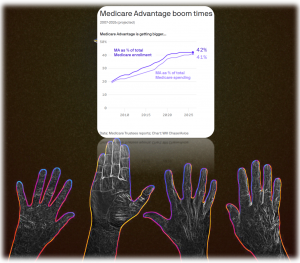