Insurers and employers are not able to negotiate lower prices with hospital systems or establish smaller networks they believe deliver greater value when 1 or 2 healthcare systems are the only ones that own nearly all clinics and medical practices. These mergers have raised cost by as much as 50%. 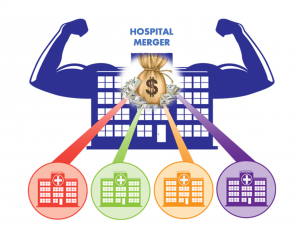 A new executive order, that has not received much attention, to control costs in the healthcare industry and to promote competition was signed by President Biden’s.

Mergers now account for two-thirds of hospitals in a system, and all metropolitan areas are currently deemed highly concentrated healthcare markets. Private equity firms are behind most mergers, and their pace is likely to speed up with the larger systems eating the smaller ones as COVID has made smaller and rural hospitals and smaller medical practices more fragile.

The FTC and the DOJ’s Anti-Trust Division lack the staff to examine most mergers and, in some cases, the authority needed to ensure that markets remain competitive. While they can review mergers, they do not generally have the authority to intervene, for example, to stop non-competitive practices by non-profit hospital systems.

Nearly 60% of all hospitals are non-profit, including some of the largest health systems in many parts of the country. The FTC also lacks the authority to monitor the hospital acquisitions of large numbers of smaller practices which individually fall under the threshold for requiring notification of the FTC. States face a similar array of limitations to their authority.

The executive order establishes a White House Competition Council, but it’s vague on what actions might follow in health, and the hospital industry would fiercely resist any effort to beef up anti-trust action and promote competition to drive down prices.

Hospitals have been sitting on the sidelines happily watching policymakers go after drug costs. But drugs represent 10% of health spending while hospitals represent 34%. A more aggressive policy aimed at anti-competitive mergers and consolidation in the hospital industry would aim right at high hospital prices that drive up health spending.