The amount of money Americans have to pay out of pocket for healthcare expenses before their insurance kicks in is now double what it was a decade ago.
The average deductible for an individual is $1,655 a year, roughly double the $826 workers paid about a decade ago, according to the Kaiser Family Foundation’s annual Employer Health Benefits Survey released Wednesday.
A greater number of employees have deductibles compared with a decade ago, too. A little more than four of every five covered workers have a deductible, more than 63% of workers who had deductibles a decade ago.
For a family insurance plan, employers and workers pay a total of $20,576 a year in insurance premiums. Of that, workers are annually contributing $6,015, an amount that’s also rising.
The increase in medical expenses is coming at a faster pace than both wage growth and inflation. In the past year, annual family premiums rose by 5% while wages rose 3.4% and inflation rose 2%.
While wages and inflation have cumulatively increased by 26% and 20%, premiums are cumulatively up 54% over the past decade, while deductibles have skyrocketed 162%. 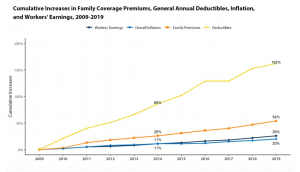